Book Review
If Cats Disappeared from the World By Genki Kawamura 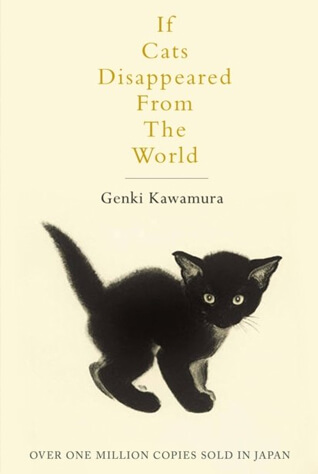 Our narrator's days are numbered. Estranged from his family, living alone with only his cat Cabbage for company, he was unprepared for the doctor's diagnosis that he has only months to live.

But then the Devil appears with a special offer: in exchange for making one thing in the world disappear, he can have one extra day of life. And thus, begins a very bizarre week and an extraordinary book.

This is a steady, emotive story, with an easy rhythm and a modest ensemble, Cabbage included. The Devil is beguiling and yet it is the mortal characters who give the story its depth and power. Kawamura has a tender approach to these few people (and cat) resulting in realistic, heartfelt relationships.

Plenty of authors have written novels five and six times the length of this yet fail to achieve the emotional gravity Kawamura has woven into these few pages. His writing is as generous as it is precise. While not without flourish and a pinch of humour (fortunately not lost in translation) so much is said with so little. The dead weight and unessential baggage of the rest of the world fall away, allowing an authentic understanding of humans and humanity to rise in its stead.

It is easy to see why it has sold over a million copies in Japan. Easier still to see why it has been, rather skillfully, translated into English. If Cats Disappeared from the World is a universal story of love, understanding and what it means to be a family.

To say I read it in its entirety with dry eyes would be a lie. I’ve already turned to read it again, pleased to gain so much from such an unassuming book, worthy of every inch of praise and acclaim.