Book Review
Mudlarking: Lost and Found on the River Thames by Lara Maiklem 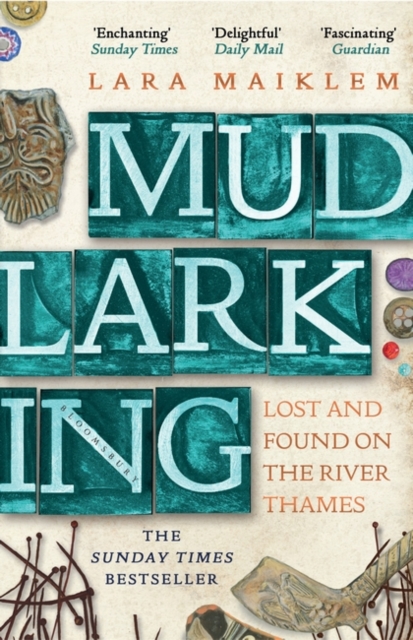 Lara Maiklem has scoured the banks of the Thames for nearly twenty years in pursuit of the objects that the river unearths: from Neolithic flints to Roman hairpins, medieval buckles to Tudor buttons, Georgian clay pipes to Victorian toys. What began as a search for solitude came to reveal the story of a city, its people and a way of life.

Maiklem and the Oxford Dictionary define a mudlark as a person who scavenges for usable debris in the mud of a river or harbour, formerly by street urchins and the destitute, now by the historically inclined and the curious. Maiklem is a combination of the latter two.

It’s clear from the outset that history is a real passion for Maiklem, but not your usual Kings and Queens business. The objects we throw away or lose can say a lot about us, and it is the surviving treasures of the every day that enamour Maiklem. Clay pipes or a whole leather shoe nearly 400 years old, bricks (surprisingly interesting!), pins, beads and so many more fragments of people's lives, untouched since the day they were lost, breathe new life into the past.

She reminds us that the Thames, often an overlooked geographical feature, is the anchor to the long narrative of London life, holding on to its past, before slowly, surrendering it to the present.

A mudlark needs an eye for detail. This careful attention has percolated into Maiklem’s diligent research, and of course her writing. Through language she engages the senses, immersing the reader in the landscape she has so much affection for.

This bond with the river not only cultivated an interest in its diverse history, but its future too.

Cities, especially one so big as London can seem like lost causes when it comes to environmental protection, that it’s too late for them. Mailklem, however, champions that while other rivers have vanished under the city’s paved streets the Thames cannot be stopped and can still be protected from rubbish, sewage and erosion.

Approachable, intriguing and engaging. Much like the foreshore of the Thames, Mudlarking is a book rich in treasure, history and hidden secrets.