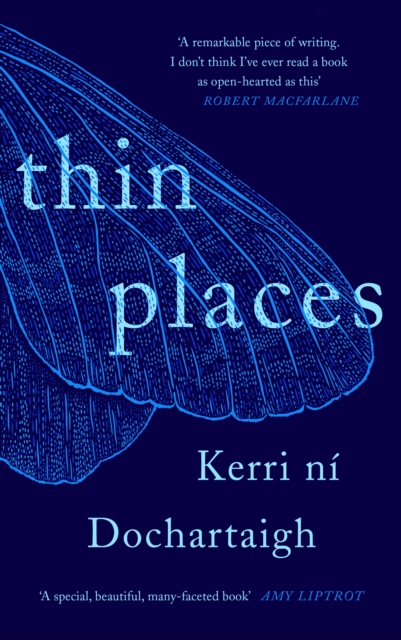 In Thin Places Kerri ní Dochartaigh shares her harrowing experience of a childhood lived in the heart of the Troubles in Northern Ireland. The narrative begins in 1980s Derry-Doire-Londonderry and is brought into the writer’s present day, when Brexit reawakens ghosts of violence and division in the town. Alongside the terror of that life ní Dochartaigh outlines the ephemeral yet tangible encounters with the natural world that saved her – that still save her.

The thin places of the title – where ‘the veil between worlds has become thin as moth-wing’ – are not simply places of ancient stone and soil, or even places in time such as Samhain, although those places are in there. They are also ‘political, physical, economical, and geographical’ – those words referring to the border that snakes across Ireland, and across ní Dochartaigh’s life, ‘a ghost vein on the map of my insides’.

There are thin places that are darkly human, a glass strewn woodland at the edge of the Bogside district, a quiet street in night-time Bristol, a stone Famine bridge in Donegal, but in these places ní Dochartaigh also sees the more than human.

Both nature writing and memoir, this is a book cleaving to life, a soul reaching out to parts of her world that do not split her apart, and that gave her a place to find a way forward. ní Dochartaigh is unflinchingly honest, reaching ‘right down into the bone and marrow’ for her words. As a result, this book reaches right into the heart of you.

The poetic language that introduces each chapter slows you right down, bringing you close to the veil between your own life and ní Dochartaigh’s; then she lays out the realities of that life in plain prose that cuts through it all. She writes at one point of the ‘silken balance between delicacy and strength’ required of Irish women: her words bond the two main threads of this book with that same delicacy and strength.

Thin Places holds in balance ní Dochartaigh’s brutal early life, the politics and realities of living through the Troubles and their long-term effect, and the worlds and lives that exist around it all. It crosses boundaries and thresholds: the whooper swans that lift across a petrol-bombed city, the urban fox that follows her to her doorstep, and the winter moths that alight on a human life. In finding that balance, ní Dochartaigh has created her own thin place, an exquisite veil of words with hope whispering through them.